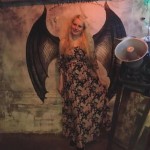 The Sadness is a pandemic zombie horror that flips the expected on its head. Gone are the Romero-like braindead creatures, unknowing in their actions and killing primarily for food. Here the zombies are rabid sadists playing out the worst things they can imagine doing, whether that’s murder, rape or torture.

Deuteragonists Jim (Berant Zhu) and Kat (Regina Lei) wake up one morning amid a country-wide pandemic that has thus far not caused many, if any, fatal or serious symptoms. The day starts off relatively normal, although the two do have a row about a potential holiday they have coming up. As Kat’s on her way to work however, things quickly go south as those infected with the virus begin attacking and murdering other citizens.

Not a film for the lighthearted, The Sadness is a gore-tastic flick filled to the brim with violence, blood and guts. The extreme violence will have even the most seasoned gore fans squirming in their seats. That’s not to say the film goes too far, although I’m sure some viewers will argue that it does.  The violence never feels like it’s there purely for shock value, everything that happens is part of the film’s wider story. With many films like this many will worry about just how graphic the rape and sexual assault scenes are, and while it’s extremely clear that these things take place, for the most part, the camera pans away from showing this in too much detail.

The influence of the Covid-19 pandemic is clear throughout the film. At the story’s beginning, we see a conspiracy theorist spreading misinformation that the virus has been spread by the government as it’s an election year. Similarly, Jim is told by his neighbour that the virus is a conspiracy. Created by media companies and business owners, to tank the economy so they can buy up everything when it’s cheap and then sell at a profit when the circumstances improve. It’s clear from the very start that this is not a film afraid of making its message clear. Something that works exceptionally well here as we watch society collapse, because the government refused to act and people ignored the risk.

One drawback the film has is that the viewer may find that they never really emotionally connect with the characters. We root for them to survive for sure, but past that there’s a lack of backstory. Yes, these characters feel incredibly strongly for one another but we never find out anything further about their relationship. Perhaps it’s the quick pacing of the film, or the story itself, that doesn’t allow for this but it does feel somewhat lacking when the relationship is hugely central to the story.

The Sadness is a good new addition to both the zombie horror, and the gore sub-genre, that will leave fans of both of these thrilled with this take on the age-old monsters. Perhaps not one that is best for newcomers to either category though as it can be rather heavy for those not accustomed to this level of violence and gore.

The Sadness releases on Shudder on 12 May