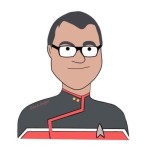 Popular culture currently has an intense fixation on the multiverse as a concept. Two relevant current examples are Doctor Strange in the Multiverse of Madness and Everything Everywhere All At Once. Many may ask “What is a multiverse?” and the highest level answer is – when alternate realities within a single property connect in some way. Admittedly that’s a simplistic description for something so wide-ranging and complex but on the highest level that’s what it is.

For many the first exposure to the idea would have been through the Star Trek: The Original Series episode “Mirror, Mirror”. This episode featured Captain Kirk, Doctor McCoy, Lieutenant Uhura and Scotty accidentally finding themselves in a twisted alternate version of their own world where everyone was a campy sort of evil and Spock had a goatee. “Mirror, Mirror” is a classic that became enshrined in pop culture to the degree that many subsequent evil doppelgängers came with a goatee. The episode even inspired a prog-rock band called “Spock’s Beard”.

The episode introduced many impressionable viewers to the idea of alternate universes where recognisable elements were skewed in ways that writers could have a lot of fun with. In this universe, Kirk has to watch his back because those under his command are always waiting for their chance to seize power. When examined in any detail anyone would be forced to conclude that the setup couldn’t possibly function, but the point was to have fun and provide an excuse to further extol the virtues of the enlightened utopia that Star Trek so firmly represented.

Over the decades alternate realities were explored in other properties, usually to allow some fun to be had with alternate takes on characters or to explore a scenario where choices had been made that turned out differently though there’s an important distinction to be drawn between the multiverse and alternate timelines. They are similar but also very different. An alternate timeline is when something in the past is changed so that events play out differently; usually to be resolved by the end of the story. A classic example of this can again be found in the Star Trek franchise. The Next Generation episode “Yesterday’s Enterprise” where history is altered so that the Enterprise crew are in the midst of a long War they are on the losing side of.

Also in Star Trek the JJ Abrams 2009 movie is an example of the multiverse as it’s an alternate timeline where the events of the film have no bearing on the original timeline. That is a slightly more complicated example because the story also involves time travel but the old timeline isn’t restored by the end of the film nor is it destroyed by the time travel; at least as far as dialogue suggests in the film itself.

The successful 2005 Doctor Who relaunch introduced the idea to mainstream audiences in the 2006 episodes “Rise of the Cybermen” and “Age of Steel”. These episodes took cues from Philip Pullman’s “His Dark Materials” book series with the alternate universe prominently using blimps as a mode of transport. It wasn’t an especially deep take on the multiverse concept but the characters explained it in an easy to digest way. Alternate versions of many of the characters existed with a focus on what made them similar to their original universe counterparts despite the differences that were presented.

A more complex example of the multiverse idea could be found in Fringe. A vast chunk of that show connected the main universe to an alternate one where characters were remixed in really interesting ways. The second universe had its own feel and aesthetic distinct from the primary one; pulling off the seemingly impossible task of developing two distinct and equally interesting versions of many of the core characters. It was fun to explore and was used as the catalyst for meaningful storytelling. It was a much more mature take on the concept than the campy “Mirror, Mirror” and really showed how much potential the concept had. Other examples existed in other properties but Fringe was one of the few to take it beyond an enjoyable gimmick.

Another extensive example of this can be found in the now sadly decaying Arrowverse. Season 2 of The Flash introduced the idea of the multiverse by showcasing an alternate Earth called Earth-2. That Earth was home to alternate versions of most of the principal cast, most of whom had made different choices in their lives. Earth-2 Barry Allen never gained powers and became the Flash in that universe. It also had its own distinct aesthetic and echoed Fringe in its execution albeit in a far less sophisticated way. The Flash was more concerned with having fun with riffs on different characters and solving certain storytelling problems by having more outlandish ideas come from Earth-2. As the Arrowverse developed outlandish ideas became the norm but early on Earth-2 was the testbed for these.

The multiverse allowed the Arrowverse to do some really interesting things. Supergirl was folded into the continuity through the explanation that it takes place in an alternate universe, John Wesley Shipp’s Barry Allen from the 90s The Flash TV show made his return despite the actor playing two other characters in the show, a crossover event involved Nazi duplicates attacking them and the whole thing culminated in “Crisis on Infinite Earths” where previous and current DC properties were referenced in brief or extensive ways. Tim Burton’s Batman continuity merited a mention and it offered closure of a sort for Brandon Routh’s unfairly maligned take on Superman. Ezra Miller’s Flash even gets to briefly meet Grant Gustin’s take on the character. Currently the multiverse is closed for business in the Arrowverse but “Crisis on Infinite Earths” ends by making it clear that it still exists.

Even the biggest franchise in the world couldn’t stay away from the multiverse. The Marvel Cinematic Universe first mentions it in 2016’s Doctor Strange when Tilda Swinton’s Ancient one explains that Sorcerers draw their power from it. Avengers: Endgame uses time travel to create alternate universes so that the actions of the characters don’t alter the carefully cultivated timeline. This eventually forms the basis of the Loki TV show which goes into more detail but Endgame is careful not to overcomplicate its plot by explaining the alternate reality idea too deeply.

The MCU plays with the idea again in Spider-Man: No Way Home where villains from the two previous cinematic iterations of the web slinger jump universes with the native Peter Parker’s joining them. This is used as an opportunity for Tom Holland’s Peter Parker to compare and contrast his exploits with those of his predecessors and the film has a lot of fun with their interactions. No Way Home was no doubt inspired by the excellent Spider-Man: Into the Spider-Verse where Miles Morales learned what it means to be Spider-Man through the similarities he finds in the spider powered heroes from other universes. Animation allows the imaginations of the creators to run wild with a unique visual flair to each universe evident in their character with the uncanniness of them being together being exactly the point.

Doctor Strange in the Multiverse of Madness takes a different approach once again by using it to examine the potential of Stephen Strange himself. Time will tell what this is building to if anything but the MCU is clearly playing with the variety that the multiverse concept provides.

There are so many different ways to think about the multiverse and how it could/should be used. Is it for fun? Is it to allow past iterations of characters to return by interacting with the current versions? Is it to resurrect dead characters by simply transplanting a similar version from an alternate universe? Each of these questions and more are all equally valid. Star Trek’s mirror universe provides campy evil versions of the familiar characters with a more serious yet still campy take in the first season of Star Trek: Discovery, Fringe leans on the complexity associated with the alternate universe counterparts being fully fleshed out different people and the Arrowverse does all of the above in different configurations.

The beauty of it is that the potential exists for any given member of a viewing audience to get what they want out of it. If you want to see Brandon Routh have a final go at his take on Superman then watch the Arrowverse, if you want to see compelling alternate versions of familiar characters then watch Fringe or if you want to see campy evil versions of your favourites then watch Star Trek. Such a wide range of potential makes it difficult to deliver a definitive thesis on the idea but with Michael Keaton ready to make his return as Batman should The Flash ever be released in any universe there’s lots to look forward to. The potential is infinite so perhaps the best way to describe the multiverse from an audience perspective is “everything everywhere all at once”.