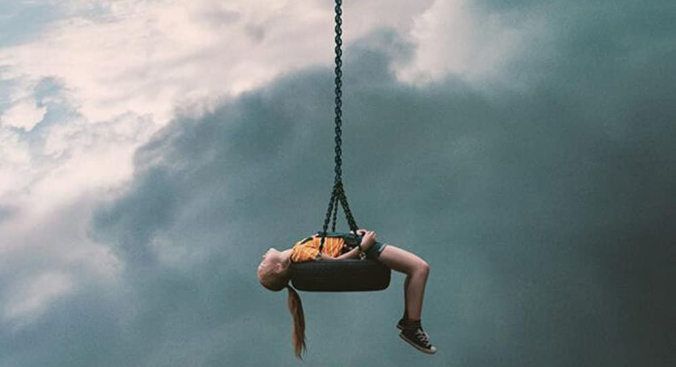 Eskil Vogt, writer behind Thelma (2017) and The Worst Person in the World (2021) directs his second feature film in The Innocents. This is not to be confused with the 1961 haunted house film starring Deborah Kerr, though also not without its similarities. Unlike that classic offering however, where the children are central to the mental conflict within their uptight English nanny; in this film, the adults carry on in blissful ignorance of everything their children are going through.

This year’s The Innocents is potentially one of the most disturbing films ever made. Taking elements from The Village of the Damned (1960), Let The Right One In (2008) and the chilling daylight horror tension of Don’t Look Now (1973), and creating something fresh, new, and horrifying. In this case, the implications of what you can’t see are an artistic choice as much as a practical one, and the storytelling is all the more powerful for it.

Ida (Rakel Lenora Fløttum) is 9 years old. She has just moved to a new apartment building with her parents and her autistic sister Anna (Alva Brynsmo Ramstad). Anna is non-verbal, with significant care needs. She doesn’t show outward signs of pain, and Ida tests this by pinching her and putting glass in her shoes. It’s as awful to watch as it sounds.

Ida meets a boy, Ben (Sam Ashraf), who reveals that he has some limited telekinetic powers. They also meet Aisha (Mina Yasmin Bremseth Asheim) an empath. When they add Anna into the mix, they find that their powers are escalated and increased.

Ida’s tendency to hurt her sister is transplanted to other things; a worm, an ant’s nest, and in some of the most disturbing scenes, a cat. Ben takes this to the next level and gradually becomes more and more dangerous to those around him.

As suggested, The Innocents is a horror, and it is dark. However, it does not feel like a piece of exploitation cinema. There is gore but it is minimal. There is violence, but it is passive. And in place of scary monsters, we are left with the underdeveloped frontal cortex of traumatised pre-pubescent children.

Between neglect, jealousy, abuse and dealing with parents who suffer with depression, each of these children has some trauma to solidify their stress. The mix of races on display, the mix of classes, suggests a group of children who are starkly aware of everything their parents are going through. But the assumption is always that they are ignorant, and that they are innocent. The usually quiet inner worlds of the young as they play and talk are brought centre stage, but subtly so. We do not see big movements that everyone would notice, but instead we are brought closely into their world to experience these conflicts as they do. The world around them carries on as normal.

Vogt has drawn some stunning performances from his cast. In particular Sam Ashraf as Ben, who despite his escalating violent behaviour is sympathetic. Alva Brynsmo Ramstad’s Anna too is incendiary. The representation of autism of this type is respectful, highlighting their vulnerability alongside their humanity. The cast is held together by Rakel Lenora Fløttum’s Ida. Who grows from a vicious brat to a child who will do anything to protect her sister.

This is rounded out by cinematography from Sturla Brandth Grøvlen, who creates stark landscape images, making excellent use of the long bright days. Daylight horror stylings are combined with the boundary between childhood and adulthood; brought to the screen in the contrast between nature and urbanity. Pessi Levanto’s score also moves beautifully between quiet piano and metallic tones that emphasise and fill in the gaps in what we don’t see.

The Innocents is an ambitious, anxiety inducing and intense piece of work. Within the first half an hour, it suggests terrifying things to come, and it delivers. The ending however, like so many childhood arguments, seems to whisper itself away on the wind. And it is all the stronger for it.