Everything Everywhere All At Once (Film Review) 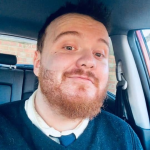 Mass-interest in the idea of the multiverse has boomed, thanks in large part to the Marvel Cinematic Universe. Though it can certainly be traced back further to films about time travel and their accidentally created alternate realities. It’s a happy accident that the UK sees two hotly anticipated multiverse releases within days of each other, one of which is the next instalment of the biggest franchise in cinema history, the other is a little film about laundry and taxes.

Michelle Yeoh’s Evelyn, matriarch of the Wang family, is in the heat of US tax season, facing a life-or-death meeting with the IRS and the future of the family’s laundromat. All the while, her aging father, Gong Gong, has recently moved in, her daughter, Joy, is worried about telling Gong Gong she has a girlfriend, and her husband, Waymond, is trying to present her with divorce papers. Upon being presented a mysterious choice by a man using Waymond’s body, Evelyn is sent on a wild journey through the multiverse to fix everything, everywhere, all at once.

It’s futile to beat around the bush; everything you’ve heard about Everything Everywhere is unreservedly true. You would think for a film with such immense levels of anticipation, it would be impossible to even reach those expectations, but they were exceeded and then utterly shattered within minutes. There is a feeling with certain films that you just know a film is in good hands very early on, never truer here than with such a confident opening sequence.

Daniels, in their second feature following indie-darling Swiss Army Man, guide you through a chaotic opening with sumptuous ease, balancing character introductions and relationships and some very funny humour amongst plot machinations and some multiverse shenanigans. It’s Everything Everywhere in a nutshell; the anarchy increases at a consistent pace, but the heart of the piece – this family and what they all mean to each other – is never, ever left behind.

Evelyn, Waymond, and Joy are a trifecta of wonderfully realised characters, each with their own abundantly clear motivations. Joy, the rebellious teen, is eager to break out of her parents’ shadow and forge a path of her own. Waymond, the lovable husband, will do everything for those he loves and is desperate for everyone else to do the right thing. Evelyn, the overwhelmed wife, struggles with all her spinning plates and wishes she could be everywhere but finds herself, as we all do, stuck in place. All three are excellent, but special praise must be reserved for Michelle Yeoh and Ke Huy Quan’s Waymond.

Quan, someone who stepped away from acting for decades and became an accomplished stunt choreographer, is wonderful. There are little elements and quirks of his most famous character, Short Round from Indiana Jones and the Temple of Doom, but it’s his small touches of empathy, warmth, and love that elevate Waymond to another level. This culminates in a stunning monologue near the film’s conclusion on the power of being kind that has stayed with me in the days since. Quan plays multiple versions of his character with equal levels of brilliance, whether paying homage to the physical comedy of stunt work perfected by screen legend Jackie Chan, or suave, James Bond sophistication as he smooth talks his way to Evelyn’s heart in a different reality. In only his second role since 2002, Quan gives a remarkable performance that, in any other film, would have stolen the show entirely.

Michelle Yeoh, meanwhile, is a revelation. Crucially, Yeoh is always playing the same Evelyn, which allows for a different level of performance. Evelyn learns ever more about herself as she interacts with different versions of those she loves, of the impact she has on others, and of course the impact others have on her. Yeoh bears the weight of the multiverse on her shoulders, though her priorities of being a good mother to her daughter bears more weight than all. Yeoh’s Evelyn is so brutally honest with those she loves and casts unfair aspersions against them in equal measure on her journey of self-discovery and the resolution of her journey is one of the more remarkably emotional scenes in recent memory. Yeoh delivers these scenes with such authentic and beautiful simplicity that it must be seen to be believed. For all the bells and whistles of traversing the multiverse, Everything Everywhere is just about people trying to do right by themselves and others, a message repeated time and time again. Evelyn and Waymond are the embodiment of that.

The Wang family dynamics are wonderfully authentic, akin to the in-jokes we all have with our own families, right down to a misremembered film title that becomes fully realised in the multiverse of madness. The way Daniels’ script effortlessly blends action and humour allows you to, for lack of a better term, get on the film’s level. In isolation, several scenes likely would come across awkwardly, but taken as a cog in Everything Everywhere’s beautifully oiled machine, the absurdist sequences and off-kilter jokes work brilliantly. The riff on Ratatouille is a personal favourite, but a scene surrounding a curiously designed award is both laugh-out-loud funny and expertly choreographed. Meanwhile, the film’s central conceit of the mysterious object at the heart of the multiverse is at once very silly, while also being remarkably moving once it all comes together. You dread to think how complex this film’s writing process was, but the end result is surely one of the screenplays of the year.

Everything Everywhere All at Once truly has everything. It’s a multiverse adventure for the ages and a celebration of its wackiness – if you felt Doctor Strange’s multiverse was a little too simplistic then you’re in for a treat here – that never lets its focus out of sight. Certainly, it’s a visual delight, incredibly exciting, and consistently funny. But, its key focus, the wonderful Wangs, is so essential to the film’s success and creates an even better experience for it. You’ll be hard pressed to find a better film all year.

Everything Everywhere All at Once will be released in UK cinemas on May 13.

Rhys has been writing film reviews for over 7 years and recently achieved Rotten Tomatoes approval. He has a fierce love of time travel and monster movies, longing for the day when the two combine to make the ultimate film-going experience.