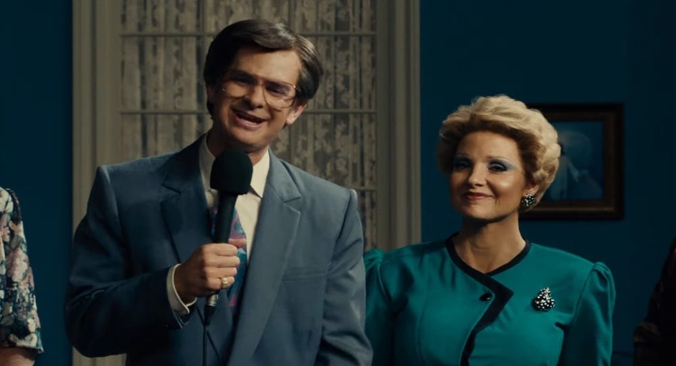 At one time, Tammy Faye Bakker and Jim Bakker were labelled ‘the Ken and Barbie of televangelism.’ The pair emanated the perfect crystallization of the Christian-American ideal – betrothed to one another, but forever devoted to God. Ironically, they were in many ways an apt microcosm for the American nuclear family – an insecure narcissist with prideful desires, and the underappreciated and exploited woman that facilitated his rise at the cost of her own individuality.

Director Michael Showalter introduces us to the pair at the inception of their romance – there’s a candid sweetness to Jessica Chastain’s younger Faye through her empathetic honesty, emitted through the subtle nervous ticks that comprise her layered performance. An anxious twitchiness and timid disposition rally us behind Tammy Faye, especially in the face of Andrew Garfield’s Bakker; it’s hard to resist him even as a Bible-thumping southern preacher. This optimistic spirit of Faye’s is shown to be both a blessing and a curse: it’s the core of her fraught relationship with her mother Rachel (Cherry Jones), as Tammy is blinded to the purest vision of the Church, whereas Rachel has experienced their murky ambiguity first-hand as a divorced woman.

Tammy’s blindness is her ultimate tragedy – she becomes enchanted with the perfect image of the pair as travelling preachers, spreading the word and gospel to those who need it. Through their journeys, though implicit, it’s clear that Jim challenges Tammy to transition her faith in God to faith in him as paramount in her life. She is blind to what we can see. Vincent D’Onofrio makes a strikingly unsettling play as megachurch pastor Jerry Falwell; his discomforting gravitas gives off the aura of someone so dogmatic in their beliefs, they have the power to damage an entire generation. Tammy and Jim’s gradual enveloping into the televangelist world plays out similarly to the Edenic story: one is seduced by the serpent into sinful desires, and consequently, both are punished. Showalter’s separation of perspectives through television and film cameras, alongside subtle push-ins against the proxemics of the couple, emphasizes a subtle revelation; there is a gulf growing between Tammy and Jim – she is being left behind as Jim’s appetite for celebrity grows.

As we transition into their older counterparts, Garfield adopts a slight Rogersian twang to Jim, or a Jimmy Stewart essence distilled – it seductively works to emit this cuddly, friendly ‘father to all’ personality that worked on so many in the 1970s and 1980s. Chastain’s clearly having a lot of fun playing up Tammy Faye’s more performative nature whilst maintaining her faithful righteousness, and that takes a strong performer to exude such authenticity. It’s an intricately layered performance with minute attention to detail, Chastain gradually unravels layer-after-layer, exposing a poignant vulnerability to Tammy Faye. This is a career-best performance. It’s a tacitly powerful study of the vulnerability that comes from genuine goodness. As their televangelist celebrity grows, it becomes clear that Jim isn’t building a church for God, but rather the Empire of Jim Bakker, built upon the backbone of Tammy Faye. More and more ways are found to separate Tammy and Jim physically: glass pane, distant framing and proxemics – Showalter has a knack for constructing a visual language to show rather than tell.

It’s this same visual language that informs the downfall of Tammy Faye – as her life begins to destabilize, as does the camera. Chaotic moments suddenly transition into handheld framing, slightly thrown off their axis, underlining the growing discordance between Tammy and Jim, their aggression toward one another upsetting the very form of the film. Garfield also manages to deliver a malicious 1000-yard stare that eviscerates anything in its gaze – the spry, young Jim with a twinkle in his eye has been hollowed out, leaving a void vessel of any Lord in its place. Of course, Tammy Faye herself is no angel, but you want her to transgress; you feel she deserves it, but unlike Jim, she inevitably holds herself to consequence – she stays with one man, despite knowing she would have a better life with another. That’s who she is.

As Jim’s multi-million scam artistry is revealing, it’s fascinating how screenwriter Abe Sylvia depicts evangelical megachurches similar to battling corporations caught in a war against one another – there’s something Succession-like over the clandestine meetings upon boardwalks, complicatedly religious doublespeak masquerading true intentions. It’s evident Sylvia desires to expose the rot at the core of men like Jim Bakker and Jerry Falwell – they are driven by agendas, ideologies, but above all else, ravenous hunger for power. Exploitation and corruption are the two pillars of televangelism under these individuals – the ‘righteousness’ of the ministry asserting a kind of moral justice over Jim Bakker’s actions is hypocrisy; they merely realized Jim’s value no longer outweigh the dead weight of his declining reputation. Why bother turning the other cheek if you’re not being paid for it?

Ultimately, we come back to the innate tragedy of Tammy Faye: her loneliness. There is an emptiness, an existential disconnection between herself and life that could not be filled by her parents, nor Jim Baker – that’s why her relationship to God is crucial. Her ostracization from the church finally connects her and her mother over a mutual fate of exploitation – and yet, Tammy’s eyes still see only the best in the church. That anxious twitchiness and timid disposition are distilled into a pure essence in Tammy Faye’s closing concert, purposefully calling back to our first impression of Young Tammy. She wants so desperately just to be accepted (back) into this family, so she may purge her existential loneliness. Whether that will ever come is a question Showalter and Sylvia leave unanswered, but at least there appears an optimistic sparkle once more in the eyes of Tammy Faye.

The Eyes of Tammy Faye is in UK cinemas now

Lover of all things horrifying, dark and satirical - The Rocky Horror Picture Show being one of my favorites makes sense there.