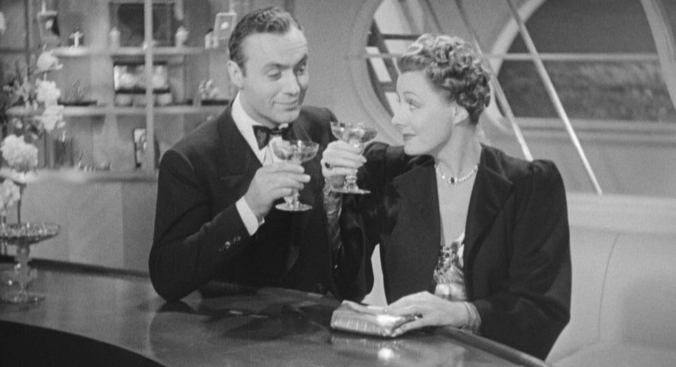 Love Affair is perhaps a film that is easiest to come to backwards. Those familiar with Nora Ephron classic Sleepless in Seattle will remember that its characters relate themselves to the romantic story of Cary Grant and Deborah Kerr’s troubled and tragic meet cute in An Affair To Remember. Less well known is that An Affair To Remember is a remake, of director Leo McCarey’s own film. Love Affair is the original version, until recently only available in poor quality 16mm prints, it has now been lovingly restored by the Criterion team from a 35mm print owned by the Museum of Modern Art.

Following the same beats as the more well-known version of the story, we are introduced to Terry (Irene Dunn) a quirky lounge singer, and Michel (Charles Boyer) a womanising socialite on a long ocean crossing to America. Both are travelling to meet their fiancé’s and get married. However, there is undeniable chemistry between them, and at the end of the journey (during which they try to hide their blossoming relationship from tabloid reading observers) they agree to meet six months later at the top of the Empire State Building if they still feel the same way. Unfortunately, tragedy interrupts this meeting, and the question then is whether they can both overcome their pride enough to reconcile and save their relationship.

Of course, it’s a familiar story, and as such it’s predictable, but this old story thankfully still has plenty to offer new audiences. The two leads are imperfect, frustrating, and believable. Irene Dunn’s Terry is a mouthy and confident heroine who has enough gumption to sink a battleship, and Charles Boyer’s Michel (though less endearing) is dryly sarcastic in a way that makes the interaction between the two of them addictive viewing. These performances are complimented by lavish black and white cinematography, which is beautifully remastered despite its age, and costumes that hark back to a richer time. When tweed suits and silk dresses were standard daily attire, journeys really did take a long time, and it was much harder to find people you lost touch with.

There is a rose-tinted view of adultery of course, and the respective fiancés are surprisingly tolerant of the chaotic on again off again nature of their liaisons. Terrys continues his friendship with her, with clear expectations, and this never comes to a head how you might expect. But it’s easy to overlook these faults. Love Affair is a fantasy, and it plays out as one.

For a film of its age though, it feels modern, particularly in its performances and pacing. Making it a worthy addition to the collection of any fan of classic cinema.

Watch a scene from the film here.

Love Affair is released onto special edition Blu-ray from Criterion on February 15th.

Blogger at screeningviolets.wordpress.com Occasional guest and host on the FILM & PODCAST. New cohost on Mondo Moviehouse. Likes arguing on the beach, long walks on the internet, intersectional feminism and neurodiversity.