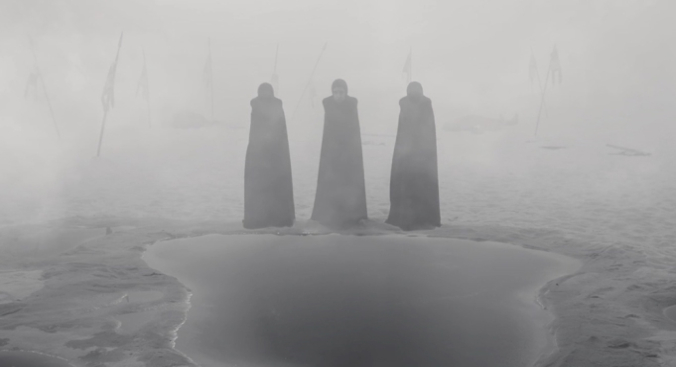 Another day, another Shakespeare adaptation. This time, one-half of the Coen Brothers takes on the infamous Scottish play and does nothing new with it whatsoever. Denzel Washington stars as Thane Of Glamis, Macbeth, alongside Frances McDormand as his lady wife.

In 2016 (just five years ago), Justin Kurzel adapted this very same Shakespeare play. Kurzel’s version was beautifully shot in some incredible locations,  creatively directed and brilliantly acted by its stellar cast, which included the gift to acting that is Micheal Fassbender. However, that adaptation was faithful to the origins of the original play and was set in Medieval Scotland. Joel Coen’s version does basically exactly the same thing as Kurzel’s, except it’s filmed in a more “A24” way and replaced the cast with less suited performers.

The Tragedy of Macbeth is quite clearly filmed on a bunch of sound stages in LA. The set design doesn’t look grand and majestic at all. The pretentious colouring and ratio make the film seem like a more expensive episode of the William Hartnell era Doctor Who. The costumes and everything else is fine, but they’re nothing special, and some of the attire does just look like fancy dress.

Denzel Washington, of course, pulls off an excellent performance in this. Unfortunately, though, he’s just not Macbeth. He’s just playing his usual character, much like in Training Day or Philadelphia, only this time he seems a bit out of place because he’s in a medieval suit of armour the whole time. Of course, he’s speaking in Shakespearean dialogue the entire time, but there’s never a point where he feels like the character he’s meant to be.

This goes for a great majority of the cast; everyone sticks with their natural accents. As a result, the consistency of the play is all off. While Joel Coen has been on record saying that the setting of Macbeth doesn’t really matter, the location of Scotland is reasonably frequently brought up in the dialogue. When none of the cast has a Scottish accent, this becomes a bit bewildering.

It’s a real shame that this film turned out the way it did because a director like Joel Coen could have brought something very interesting to a story we’ve seen literally hundreds of times before. Instead, it is just a lesser version of similar adaptations. What’s more is that the film doesn’t adapt the language, which obviously is a big point of contention for many Shakespeare fans out there. Still, in a subtitle-less screening, it’s hard to be both listen to and translate all of the quiet, quickly delivered dialogue.

The Tragedy Of Macbeth is quite simply a Tragedy. Not only does it show an element of laziness on the producers part in adapting a Shakespeare play that’s been done to death rather than any of the other 30 or so that haven’t been touched, but it brings basically nothing new to the table other than a 4:3 ratio. Justin Kurzel and Akira Kurosawa’s adaptations have come close to being topped, and it’s a shame given the calibre of Coen’s portfolio.

Freddie is the Interviews Editor and resident Batman expert at FilmHounds. He has a degree in Digital Film Production from Ravensbourne University London and he graduated from The BRIT School. Follow him on Twitter and Letterboxd for more movie ramblings

#Notallmen and the Screen – Where does Alex Garland’s Men fit in?

Do You Know Your Star Wars From Scorsese? Stattogories Puts Your IMDB Knowledge To The Test In Fun New Game