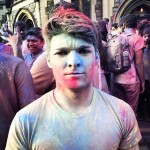 Before you read this review, I want to be completely transparent. For full disclosure, I am Welsh. I have been considered, in some circles, to be very Welsh. So, now that we’ve got that out of the way, let me tell you why The Toll is a complete slight to the land of my fathers. Only joking…ish.

I’m reticent to be too harsh on The Toll. Firstly, you can see the effort that has gone in to make the film a possibility and, frankly, the more films produced in and by Wales the better. You can also feel the ambition of wanting to stretch the budget as far as it could go, making the most of special effects and the broad, epic scope Pembrokeshire’s landscape allows. However, this strays into ‘missed opportunity’ territory and, ultimately, a bit of an am-dram piece – which is weird given the talent on show.

Michael Smiley plays ‘Toll Booth’, a lone toll-booth operator with a shady past which may be about to catch up with him. His relationships with Catrin (Annes Elwy), Dom (Iwan Rheon) and Cliff (Paul Kaye) are tested as they navigate through the unfolding chaos which threatens to bring disquiet to their tranquillity in the middle of nowhere.

My worries began around five minutes into the film where we are introduced to Pembrokeshire by a shot of a graffitied welcome sign: ‘Pembrokeshire. Where English People Come to Die’. The graffiti is poorly superimposed, doesn’t exist in real life and struck me as trite. And that’s the main issue throughout; the plot – and often the acting, props, costumes and music – feel contrived, so as to stray into bad cliché. The shopkeeper’s red and white gingham apron, the motorcycle-riding bad boy’s leather jacket and the pocket square clad cockney gangster’s driving gloves all felt a bit naff – and that was before the Elvis impersonator rocked up in plastic sunglasses. But it’s not just the costumes; the music sounded as if it had been pulled from a website of unlicensed soundtracks and dropped into the film to signpost what was being shown onscreen.

The humour is misplaced and the talent feels wasted. Michael Smiley is fantastic elsewhere, as is Iwan Rheon, so it feels really odd to see them fall short here, though Smiley and Elwy give serviceable performances which make the most of what they’ve been given. The setting feels somewhat of a waste, too. The production notes call The Toll ‘the first West Walian Western’ and, in principle, that sounds great. But jamming random, tried components together – shoot-outs, a man with no name, an isolated town – does not a Western make. The landscape has the scope to carry a Western and there’s so much more that can be do with it, but this falls well below its reference points of No Country for Old Men and Hell or High Water. High watermarks, maybe, but this feels a million miles from both.

The Toll doesn’t take itself too seriously and this is the director’s first feature, so I feel my criticisms drive a cynical knife into what is meant to be a bit of a marshmallow-y romp. And I understand the Elvis impersonator and other references are light nods to Welsh in-jokes – there’s an annual Elvis festival held in Porthcawl, Google it (it’s weird) – but even if you’re in on the joke, it just isn’t funny. It feels off kilter rather than offbeat and, to be honest, it doesn’t really feel Welsh either despite the shoehorned references, language and songs.

Anyway, I’ll leave it there. My rarebit has to come out of the grill now and these daffodils aren’t going to water themselves

The Toll is will be released in the UK on August 27th.