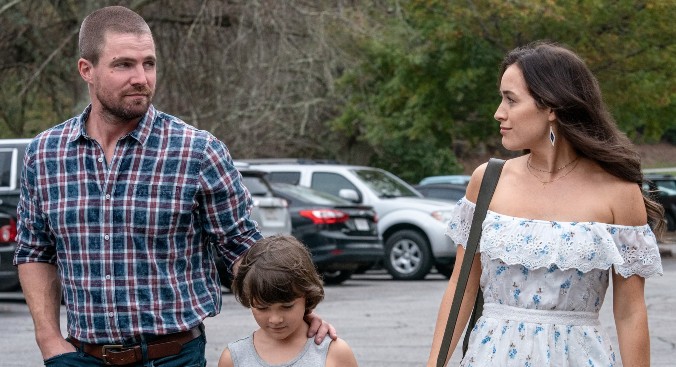 Episode 2 of Heels focuses on the fallout of last week’s dramatic conclusion, which saw Jack execute a “screw job” finish where he beat his brother Ace in a matter of minutes, infuriating the crowd and damaging the future of himself and everybody associated with Duffy Wrestling League. Now, Jack is unsure of DWL’s future, Ace is increasingly becoming a psychological mess after his brother’s betrayal, and the rest of their family (wrestling family included) are forced to deal with the knock-on effect of this fractured sibling relationship. Titled “Dusty Finish,” this week’s episode takes audiences behind the wrestling curtain and effectively shows them a deeper side of Heels’ characters while still intelligently supplying pro wrestling fans with a lot of scenes they’ll appreciate.

The episode opens with great visual contrasts of our central characters, as first, we see Ace drowning his sorrows away in bed with Crystal. This is followed up by a cut to a much quieter bedroom showing Jack, awake, failing to write the next script for DWL before making his way to his day job selling mowers, where he’s talked down to by his boss who calls wrestling the f-word (fake). In addition to this, audiences quickly see that DWL’s rival promotion is flourishing. It’s a less spectacular opening when compared to last week’s show, but it does an excellent job of showing who these characters currently are, especially away from the ring, while using minimal dialogue. It also shows the real strength of this episode from the off-set, which is character development.

Although “Dusty Finish” lacks the hook Heels’ debut episode had, it eventually finds its footing with the slow unveiling of our various character’s struggles and pasts. From seeing various wrestlers working everyday jobs, so they can earn a living to Jack letting Crystal (and the viewer) in on his past with Ace, explaining how he took care of his younger brother during difficult times at home with his father. In “Dusty Finish,” audiences are truly able to invest in these characters on an emotional level, as we see the human side of these wrestlers. It’s also through this episode, where the women, specifically Crystal and Jack’s wife Staci, come out as the babyfaces (heroes) of Heels. On more than one occasion, we see them selflessly help steer the ship of Ace and Jack’s crumbling personal lives, a narrative that’s all too familiar for wrestling fans.

Last week, the show spotlighted wrestling in a much more obvious way, but even though Heels steps away from the ring this week, it still subtly caters to wrestling fans by showcasing stories they’ve heard about on more than occasion. Whether it’s Jack’s singular focus on wrestling causing him to fail as a husband and father or Ace’s spiral into sex and alcohol, both are real stories that have plagued many wrestlers. However, what’s even more impressive is how they symbolically showcase the wrestling brotherhood, specifically through Jack’s scene with Crystal. Not only does Jack opening up to Crystal peel the onion of their respective characters, but it shows the rare comradery that exists in wrestling, as Jack refused to talk to Staci about Ace earlier but is now sharing stories with Crystal. Plus, through a simple gesture of sharing his tobacco with her, it shows him slowly accepting her into the family, which is all she wants. It’s a beautiful and captivating scene that is undoubtedly the highlight of this episode.

“Dusty Finish” still has the violence (and wrestling moves) you’d want from a wrestling show, thanks to a fun bar brawl. One that’s instigated by a man picking on Ace for crying in the ring while also suckering Jack into the fight by calling wrestling fake and disrespecting his father. Although this gives audiences a surprise coming together of Jack and Ace, we eventually get the brothers’ verbal showdown, but just not how we expected it. The smart and unexpected placement of Ace’s verbal berating of Jack only adds to the impact of his words, leaving audiences with a greater feeling of anticipation of what will happen next.

After a rather jam-packed debut last week, Heels had the difficult task of maintaining the show’s momentum. It does take some time to find its footing, and certain story developments seem to have come a little too early in the season, specifically when it comes to Jack and Ace’s relationship. Although, time will tell if that is the case. Overall, Heels brings a more relatable and emotional episode this week that teases plenty of interesting possibilities for future episodes.