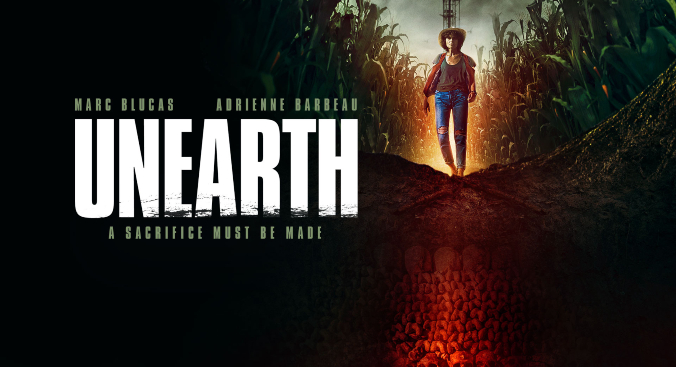 Horror often helps us to examine real world issues, be they the fear of foreign invaders, new technology, or in the case of Unearth, fracking. It’s nothing new of course; films where unexpecting people drill or dig or travel deep into the earth, uncovering some long hidden threat that attacks our heroes in new and disgusting ways.

Unearth leans heavily on its body horror ancestors: Bodysnatchers, Things and Crazies aplenty can be sought out if you look for them. Unfortunately, it fails to meet the pacing, or clarity of subtext of any of its predecessors.

We are introduced to a small farming community which suffers from a number of poverty based issues; multiple generations under one roof, arguments over how to use their land, and competition with big chains stealing their business. This is compounded for one landowner in particular as his daughter has medical bills from a pregnancy and his older daughter is in university. These families are unable to manage the land as they’d like to, and this leaves them open to exploitation from gas companies who want to drill on their land.

Like so many things the landowners who opt in aren’t the only ones affected, and the dust, noise and pollution impacts the entire community. They gradually become sick and as the drilling proves fruitless, they are left with even less than when they started, leading into a gruesome if not entirely coherent finale.

Despite the best intentions, the pacing and the incoherence makes the film a tough one to trudge through. Very little happens for half an hour, and then we aren’t given anything really horrific until an hour in. From then on it’s just chaotic random symptoms distributed amongst the characters. The physical effects are impressive, but it takes too long to get to them and we don’t see how they are created, by which point they are brief moments of interest amongst 90 minutes of brown soup. The colour coding and haze gives a very invariable backdrop to boring scenes with characters we don’t care about.

Adrienne Barbeau does her best as the aging landowner who bought the farm with her now deceased husband, but isn’t really given much to work with. Marc Blucas does as much as you’d expect from the guy who played Buffy’s boyfriend 20 years ago, but is fundamentally an unlikeable character who struggles to keep his pants on.

One aspect that strikes as incredibly misguided is a scene where an older woman encourages a young mother to switch from breast to formula feeding. Now, you could look at this as a reflection of the exploitation of mothers in poverty by formula companies, but it’s probably not wise to give the writers that much credit. It actually feels as though they really hate breastfeeding, which is out of place, offensive and unnecessary. Resulting in an ugly plot thread that will alienate more than it will entertain.

Overall, though Unearth tries really hard (really really hard) to be a moody piece of exploitation cinema with hidden depths, it ends up being more of a muddy puddle.

Unearth is available on DVD and digital in the UK on June 28th.