“I Think I Hurt Someone” – The Conjuring: The Devil Made Me Do It (Film Review) 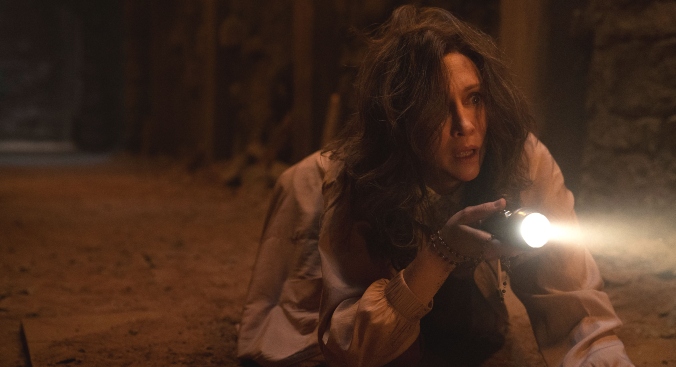 The Conjuring universe has been expanding rapidly ever since James Wan’s critically acclaimed The Conjuring back in 2013. The Conjuring 2 was an equally terrifying, UK-set horror tale and now we are onto part three, subtitled The Devil Made Me Do It. Referring to the infamous case of Arne Johnson who plead not guilty to murder on the basis of demonic possession for the first time in US history in 1981. Horror franchises throughout history have proved to be difficult to nail and the quality tends to vary wildly between different instalments, but with The Devil Made Me Do It, The Conjuring remains one of the most consistent and genuinely terrifying franchises around.

The Conjuring 3 opens with the exorcism of the 11-year-old David Glatzel (Julian Hilliard). Ed and Lorraine Warren (Patrick Wilson and Vera Farmiga, naturally) are present and Ed, who suffers a severe heart attack when the possessed child is let loose, witnesses the demon going from little David to Arne Johnson (Ruairi O’Connor). Unfortunately, he is too late to stop it. Ed and Lorraine are then plunged into a terrifying investigation that may very well be their last.

While Wan hasn’t returned, the signature style and mood he created with the two previous instalments still remains. The film changes up the haunted house structure utilised by its predecessors, and expands the action outside of a single location. Here, it isn’t a house that is haunted but the innocent people who are being cursed and possessed. It’s a much-needed change and unlike many other horror franchises, The Conjuring manages to keep itself fresh and avoids becoming stale and dated.

The Devil Made Me Do It also includes some great production design as well as costume design. The 1980s aesthetic has been captured but not so much in the usual, neon-soaked look we’re used to seeing, but in muted tones and Lorraine’s hair dos. The hair and make-up are also first class, creating a visual harmony. Michael Burgess’ cinematography supports the intense and immersive sound design. Every snap of a bone, every creaking door and a knife piercing the flesh is not just heard but felt.

Wilson and Farmiga shine in their roles once again. They bring a lot of warmth and humanity into the film, making it much more accessible and palatable. The Conjuring 3 remains firmly rooted in humanity and empathy. While the film actively wants to scare and terrify you, it also wants you to believe in the bond between the Warrens and their inherent desire to do good. Farmiga especially is on fine form, creating a fascinatingly layered portrait of Lorraine, a woman with a terrifying gift that can instantly turn into a curse. Farmiga’s Lorraine truly is the beating heart of the franchise.

If The Conjuring 3 has a fault, it’s that it offers nothing new. Chaves’ film doesn’t give us anything we haven’t seen before and while this might be the most extreme of all three Conjuring films – with a heavy dose of body horror – it still follows a traditional, predictable path. It all feels very safe; in the era where we’ve had some fantastically challenging, inventive work such as Rob Savage’s Host, Leigh Whannell’s The Invisible Man and Brandon Cronenberg’s Possessor, The Conjuring: The Devil Made Me Do It feels a little naïve and uninspired. But the franchise still remains one of the most entertaining and coherent ones in the genre and the third instalment is thrilling, gripping and utterly compelling.

The Conjuring: The Devil Made Me Do It is in cinemas May 28.