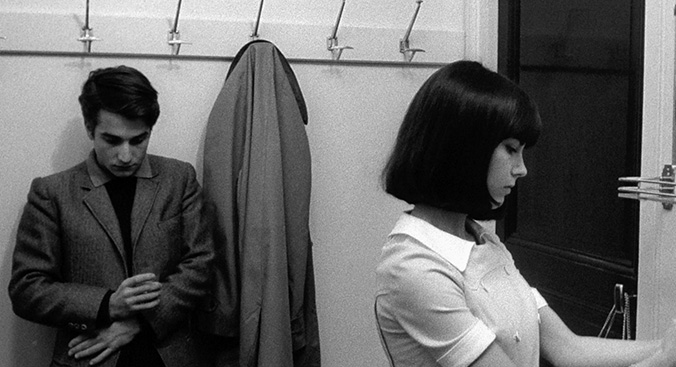 Jean Luc Godard and his fellow New Wave filmmakers of the early 1960s, like Francois Truffaut and Jean Pierre-Melville, tore up the cinematic rule book with their unorthodox techniques through the use of jump-cuts or isolating sound and for their freewheeling experimental nature.  Godard’s career can be perhaps be isolated into two distinct phases. His more accessible and perhaps career defining phase in the early 60s comprising films like Breathless, Band A Part and Vivre Sa Vie. His second phase comprised of more politically charged and radical films like La Chinoise, Two Or Three Things I Know About Her and Week-end.

1966’s Masculin Feminin acts as somewhat of a gateway film between the two branches of his career, certainly feeling political throughout but not to the point that this overtakes the film’s narrative and structure.  Masculin Feminin focuses on the relationship between Paul and Madeleine in mid 60s Paris. Paul is an idealist who has quite extreme left wing views and works for a magazine while Madeleine is a rising pop star. The pair are played respectively by Jean-Pierre Léaud, perhaps best known for his work with Truffaut on films like The 400 Blows and Chantal Goya.

The performances from the leads are the films core and the pair are able to sell the unorthodox plot and nature of their relationship, Paul’s keen political interest perhaps offset by Madeleine’s more chic nature.  Paul can at times seem rather clumsy when trying to be cool and impress Madeleine and her friends. The film’s techniques are certainly unorthodox as we suddenly transpose to conversations in the background of cafes, leaving Madeleine and Paul’s. At another point we are taken to a film within a film and as Paul gradually begins interviewing people as a pollster, we witness vignettes with close-ups of the interviewees with our sole interaction of Paul through his voice.

The film manages to capture mid 60s Paris with a sense of sweeping counter culture while also showing the chic that the city is associated with through its cafes and bars and glamorous film stars.  There are references to cultural and political events that help give the film a sense of place in time with reference to Bob Dylan, Charles De Gaulle, James Bond as well as a knowing in joke to Godard’s previous film Pierrot Le Fou. One of the defining features of Godard’s work is the use of Paris as almost an additional star in the film and this is most certainly the case here, used to wonderful effect.

Perhaps enjoyment of this film will come from whether the audience is already familiar with Godard’s wider filmography as it is probably not the best place to begin delving into his work.  However those who have perhaps just watched Breathless or his earliest works will find this an interesting transition point to the more experimental and less discussed period in his career.

Masculin Feminin offers a very intriguing glimpse at one of the French New Wave pioneers away from perhaps his most iconic collaborations with Jean Paul Belmondo and Anna Karina and is a film that captures the radical filmmaking techniques and adventurous tone of his earliest work, while hinting at political themes that would come to take hold in his later works.  As with much of Godard’s work the run time is relatively short at 105 minutes. Fans of French New Wave should certainly seek this out and those wishing to delve deeper into Godard’s work may feel find this rewarding capturing a particular point in the auteurs career.

Masculin Feminin is out now on Bluray