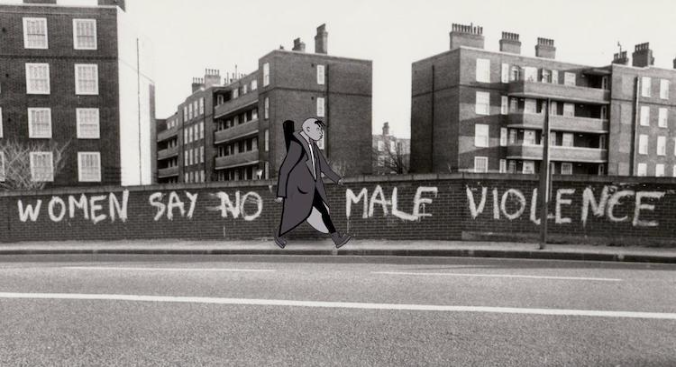 There is nothing more powerful in this world than a woman who doesn’t give a single **** about what other people think of her. A group of such like-minded and incredible women lay at the heart of Harri Shanahan and Sian Williams’ feature documentary, Rebel Dykes. The film centres on a community of lesbians coming out of London’s punk movement, who raged an anarchist rebellion on society’s ingrained homophobia and the restrictive, ultra-separatist ideology of ‘80s feminism.

Before there were Riot Grrrls, there were Rebel Dykes: a collective of activists who formed at the Greenham Common peace camp. Throughout the documentary, we hear a selection of tales from the close-knit, unruly group of friends via multiple one-on-one interviews. We rapidly jump back and forth from interviewee to interviewee as they combine their memories, personal stories and shared histories, collectively creating a visual collage of their past. A wealth of archival footage and crude animation very neatly aids the present-day interview sessions, corralling the scattershot tales into one streamlined narrative flow. The pace moves quickly, ratting from one subject to the next as the women paint a portrait of the absolute necessity of their grassroots movement.

Though we hear an assortment of tales from a wide spread of compelling and intelligent storytellers, the film centres around a cluster of critical issues. Chiefly, the Rebel Dyke’s clash with more conservative lesbian feminists, who pushed back against their approach to sex—most specifically their iconic S&M parties. The Rebel Dykes built a safe space to explore sex and push limits in a club they named Chain Reaction. However, radical feminists, who outlawed penetrative sex and dildos owing to their masculine connotations, expressed concern, feeling that S&M, domination and submission mimicked and fetishised male violence and domestic abuse situations. However, the Rebel Dykes felt differently and opposed the mainstream feminist’s attempts to police their sex lives. The Rebel Dykes outline how their perseverance eventually worked to break down the stigma of S&M and fetish.‘ ‘We respect a woman’s right to say no, but we also respect her right to say F yeah,’ they argue.

However, sex-positivity wasn’t the only issue on the Rebel Dykes agenda. Wearing leather jackets and Doc Marten boots, the girls also fought against an onslaught of homophobic attitudes, using ‘grand gesture’ activism to oppose Thatcher’s draconian Section 28, which prohibited the “promotion of homosexuality” by local authorities. The women broke into and staged protests at the House of Commons and the BBC, knowing that the more outrageous their activism, the louder their voices would be heard. The women also fought against censorship and took to the streets to demand action during the AIDS crisis. Rebel Dykes piles on story after story and rebellion after rebellion, crafting an image of a genuinely ferocious bunch of gals.

Badass? Yes, but the Rebel Dykes were so much more than a means of protest and rebellion. We also see how they formed a unique and loving family as they recall moments from the past when they each firmly had one another’s back. Many of the girls were disowned from their birth families, so they formed their own loving bonds, living as a collective and spending Christmases together. They are each other’s chosen family, and their connections run deep. The girls still meet up today, performing, protesting, creating art, music and film, running businesses and charities, inspired by that same anarchistic energy that fueled them in their youth. The group is still growing and working toward expanding its ideology. Although the Rebel Dykes have always been trans-inclusive, they now welcome non-binary individuals and are huge supporters of the ever-emerging drag king scene.

Rebel Dykes is a truly illuminating documentary that will ensnare the attention of any viewer. It paints a well rounded and fascinating picture, filled to the brim with catching kinetic energy. Once or twice, the film does get swept up in its own excitement, jumping from one subject to the next before it has the chance to fully expand on every specific theme and idea the women raise. Roz’s story imparticular feels glossed over; she briefly touches on her experiences with TERF feminism as a transgender woman, but the film moves onto something new before we can hear the entire tale. It’s a shame as it would have been beneficial to hear more of her story and experiences surrounding these issues—especially with the sudden mainstream resurgence of these ignorant attitudes currently being spearheaded by She Who Will Not Be Named.

However, Rebel Dykes is a glorious piece of film-making, and it was an absolute privilege to spend some time in the company of these tough and courageous women. They again prove that age-old saying: ‘Women who wear black have the most colourful minds’.