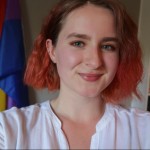 The latest dark-comedy drama from up-and-coming writer/director Craig Roberts, sees him setting his idiosyncratic tone in a film that tries to reframe the way we think about schizophrenia and other mental health issues. Yet, despite a phenomenal lead performance and some sublime directorial choices, Eternal Beauty did not put me in my oils.

After being jilted at the altar, Jane (Sally Hawkins) falls into a chaotic and severe episode of schizophrenia lasting several decades. With various degrees of support from her family members, she attempts to distance herself from the dependency she has on her medication and her eldest sister Alice (Alice Lowe), finding new romance on the way.

The camera doesn’t shy away from the bad days in her life while simultaneously refusing to over exaggerate them; elements of magical realism shine through in these moments, showing a real flexing of creative muscles and drawing you into the unusual, timeless world of the film. Interestingly I think comparisons can be drawn with Richard Ayoade’s work, a director with whom Roberts shares a history, as the quirkier and darker tendencies of Eternal Beauty are suffused by warmth and humour.

But creative flourishes and kitschy cinematography can’t conceal the fact that this is a very disjointed film. Eternal Beauty is sporadic and fragmentary, something not uncommon with character pieces such as this. However, alongside the ambiguous depiction of reality, it’s a challenge to figure out what the film is doing. Jane’s delusions are also left vague, making it difficult to determine between the imagined and the real, and whether this was a purposeful choice, aiming to align you with Jane’s (ir)reality, also remains unclear by the time the credits roll. Only in the films’ very final scene does it (somewhat) clarify what the film was really trying to convey – namely, recasting mental health disorders not as weaknesses but strengths- but it sadly comes a little too late, after an hour and a half of mild confusion.

Unsurprisingly, however, Hawkins astounds with her performance; but then you could expect nothing less from one of the UK’s best actors right now. There is a fine line when it comes to actors representing people with any form of disability and there is of course a lengthy discourse that could be had around that. Paranoid schizophrenia is one such illness with a variety of symptoms that can come out in various degrees, but Hawkins is delicate and understanding in her performance, even down to the disorganized motor behaviour that, in the wrong hands, could quickly turn offensive. The supporting cast, including Alice Lowe and Billie Piper as Jane’s sisters as well as Thewlis as the musician Mike that Jane falls for, all flit between tender and funny as necessary, but they remain, largely, forgettable when staged alongside Hawkins.

Eternal Beauty will be available in cinemas from October 2nd.