In director and writer Martin McDonagh’s previous films (and plays too), female characters are scarce. They either appear briefly or have an important part to play, but again, briefly. But in Three Billboards outside Ebbing, Missouri, Mildred Hayes, played by Frances McDormand, a female character is front and centre. Unfortunately the other female characters are seen briefly, seem underwritten or played for laughs, briefly. It’s lonely at the top for Mildred but that doesn’t stop her causing uproar.

Mildred Hayes is a mother of teenager Angela Hayes who was raped and murdered seven months prior to the start of the film. In order to gain traction after months of no contact from the local police, she hires three billboards on a disused road just outside of town. The billboards cause uproar in the small town with everyone crying against them. Mildred goes head to head with Chief Willoughby (Woody Harrelson) who has reached a dead end with the case. But the Chief has his own personal issues, not including his dimwitted colleague Officer Jason Dixon (Sam Rockwell) who tends to lose himself on the job. 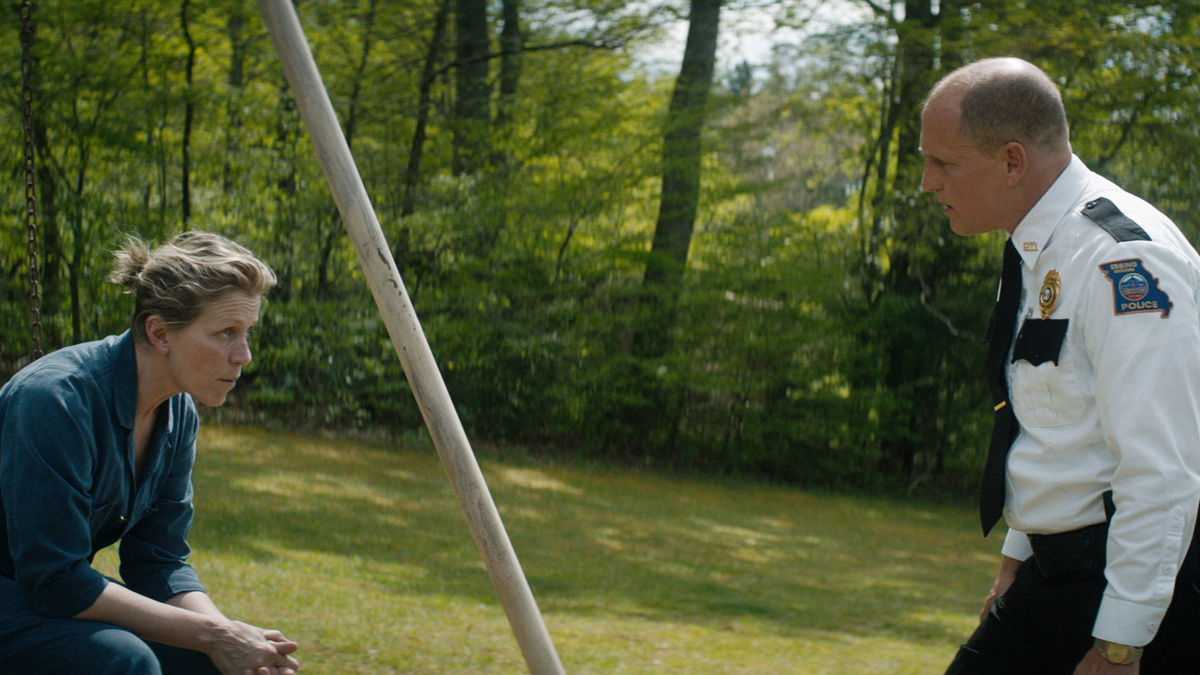 Mildred Hayes has been painted as an angry emotionless woman out to kick-start the investigation into her daughter’s murder, but underneath this anger and need to take revenge upon the police who she sees as incompetent, she is a mother still grieving the loss of her daughter. From the only flashback in the film, we witness Mildred and her son Robbie’s (Lucas Hedges) last interaction with Angela and it’s a spiteful argument, where no one comes off nice. This is also probably a glimpse at their home life, verbally violent and full of constant nasty exchanges. When Mildred chooses to put up the signs, it is more of a desperate move in order to keep the case fresh in people’s minds and in the hope that it will spur the police on to solve it. But the rest of the town doesn’t care, they’ve moved on. Several people attack and are openly hostile to her and threaten her to take the signs down, but no one stops to think (apart from her friend she works with and Red Welby (Caleb Landry Jones), who owns the billboards) that this woman’s daughter was murdered, taken away from her and she is trying to find a way to find the killer. Frances McDormand is a tirade of emotions, dressed in her ‘uniform’, her own version of the ‘We Can Do It’ lady from the wartime propaganda poster. She doesn’t falter in her agenda, has the strongest of wills and isn’t afraid of anyone.

Another standout performance from a McDonagh returnee is Sam Rockwell as Officer Dixon, a slightly dimwitted harmless who reads comics and listens to ABBA at work, then suddenly turns, violently beats up a man and throws him out of the window. Luckily, his bizarre actions have consequences and he slowly begins to turn his life around. His character is the only one to develop through the film, he starts to understand what makes a police officer and goes to extremes to find the truth showing his dedication and that he too wants to find answers. The film is really about the billboards, standing quietly on the edge of town, left vacant for decades until they are suddenly the centre of attention. Beginning and ending the film, we get a picture and a sense of how the characters were prior to the billboards going up. We can guess how things continue after the credits role with the boards having halfway served their purpose. Just within the short timeframe in which the film takes place, the billboards themselves witness terrible acts and are nearly burnt to the ground. By the end they represent hope rather than an act of desperation, which in turn gives hope to Mildred in her quest for justice, finding kinship with Mildred in a series of twists brought about the two of them making drastic decisions. The two of them are unlikely friends at the start, but as the story continues, you can see they just want justice.

McDonagh has once again crafted a brilliantly violent and emotionally charged script about anger, revenge, regret, unfulfillment and justice that isn’t always served. Three Billboards is a highly anticipated film that hopefully will be appreciated for its emotional elements as well as the sudden bursts of aggression.

Three Billboards outside Ebbing, Missouri is released in cinemas in the UK  12th January 2018.